Now, that I hear it in the sentence, I think ‘dirty’ is the better word. It is a bit more intimate and street sounding although I’m not sure anyone talks like me. I wasn’t even going to write about my comings and goings except the going kayaking which I did today with today being a Saturday just in case you are reading this on a Wednesday you’ll know the real truth although I’m not sure that truth has degrees of truthfulness. It may be very much like that line in Cloud Atlas “there is only one truth.” Not that I know what that one truth is but I suspect that I know what it is. The one truth not the one truth that was in Cloud Atlas although they are kind of the same if you look at it in the right light. It’s not easy to explain and that would be a post for another day.

But this is the post for today and it’s about my decision to ramble on which was triggered by a comment that was left on one of my posts by Madame Weebles. I just recently started following her but not in a paparazzi kind of way and she’s terrific. Anyway, she left a comment on my Rush post and I was like “Madame Weebles reads my blog??” I used two question marks to give you a sense of my astonishment. So I was thinking about my reply and I thought that was too much to put in a comment so this is kind of my reply although I really should briefly but in a friendly grateful way reply to her comment back on that post which I haven’t done yet. Yikes! I haven’t even approved her comment. Hold on. I’ll be right back.

Okay. That’s done.Thank you for holding, now back to her comment. She asked me about the Rush concert which I attended last Saturday by myself because nobody wanted the free Rush ticket. I almost talked myself out of going because I get a little panicky  about crowds. (Just an aside, but why is panicky spelled with a k? Is there some kind of rule about adding a k to words ending in c before adding a y?) I wasn’t always this way but I’ve gotten much worse over the years and I’m old.  As I was getting ready to leave my house I was starting to feel a little sick to my stomach. That’s the kind of panic I’m talking about.

Wow. It’s been awhile since I used one of those parenthetical asides and it felt good. And picking right back up where we left off…. Despite feeling a bit panicked (must have the same rule for ‘ed’ and ‘ing’), I went and I am so glad I did. Being brave has its rewards. It was phenomenal! I’m not a huge Rush fan. I like everything I’ve ever heard by them but I don’t have any of their albums. But I’m not a guy. When I told my friend Jane that I was going to see Rush she said that there would be far more men than women there because Rush is a guy’s band and she was right. I would say about 15% of the audience was female.

The show was sold out. And this was the first time I have ever attended any big event where I didn’t have to stand in line for the bathroom. I didn’t even have to wait for a stall to open up. Several ladies in the restroom commented that it was the first time they didn’t have to wait but I did hear a couple of men though they weren’t in the ladies restroom complaining in a this has never happened before kind of way of having to wait to get in the restroom. I heard one of them say “Now, I know how my wife feels.”

I didn’t mean to go on about the ease of getting to the restroom though it was one of those rare experiences that doesn’t come around that often which would be the definition of rare. Redundancy can be wordy. What I meant to say was this non-huge Rush fan was blown away by the three hour show. If you ever get a chance to see them live, you should. Also be prepared to see mostly men in the audience. It was kind of cool though. I saw groups of men coming in together and some fathers and sons. Most of the crowd was late 30s to 60s. I’m laughing a little as I type this because I’m closing in on one of those numbers or the other one doubled. There were also some younger dudes there, too.

Now, I haven’t seen many concerts in the last couple of decades but I saw a few great concerts in my day – Allman Brothers, Led Zeppelin, Rolling Stones with Van Halen opening for them and David Lee Roth was still with Van Halen to give you an idea of how long ago and technology has changed. Back then, it was just a band on stage playing and you might get a little light show. Now, rock and pop concerts are multi-media extravaganzas. This concert was like that but the music and lights and images on the video screens really did complement and play against each other. It was very polished and yet there was genuine enthusiasm in the performance.

It was great. Which is what I told Madame Weebles but she really deserved a better response. And this was it, because I so appreciate her comment and all my comments from everyone who comments even though I’m not the chattiest Cathy and I don’t lurk about the internet quite as much as I used to. I’ve been doing yoga and reading books but not at the same time. But I did want to thank Madame Weebles and all my readers for reading but just Madame Weebles for inspiring this post. So thank you Madame Weebles, you’re terrific. 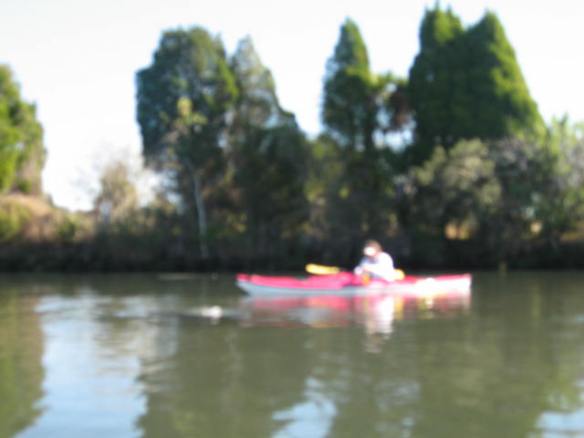 If you’re like me you think this picture is a little out of focus but if it was in focus you’d be able to see a manatee because we saw lots of them today but that’s a post for another day. As for the out of focus-ness, I’d like to blame the camera but I think it was more the operator.

24 thoughts on “Randy French Rush To Be Risqué”