So since last I wrote, much has happened. Some of it may have happened before I last wrote, the rest of it happened since last I wrote and all of that adds up to much but not too much. In telling my tale of what has been, I may not stay to a strict linear timeline. It’s not that I can’t remember the exact timeline, but that would be too planned and I would rather have my thoughts, and thus my writing, be more extemporaneous. So if you’re feeling extemporaneous, and who isn’t, let’s set out on our little adventure.

I went scalloping with friends. We went on a Friday. We delayed our departure because it was raining, but eventually we set out. It was a nice day. Then it got rough for a bit as a storm blew around us. Then it was sunny once more. We got some scallops. I didn’t clean any because I always mangle the meat when I try to detach the muscle from the inside of the shell to get the shell to open. Then once it is open you have to scoop out the band of eyes, yes I said the band of eyes, and all the other squishy stuff exposing the clean white nub of meat sitting on the half shell. It’s a lot of slimy work for very little meat. I had fun. I cooked the scallops with a little bacon, garlic, butter and wine. It was good.

The next day, I went kayaking with the same friends I scalloped with plus some others. I know I said I wasn’t going to stick to a linear timeline, but this is the order of my extemporaneous thoughts. It was a beautiful morning when we set out on the Weeki Wachee River. Then it rained for a bit. But the sun was soon back. The river is spring fed and the upper two thirds (I seem unable to avoid fractions, but I know some of you like math references) are pristine and crystal clear.  It was the first time I took a camera and the camera I took happened to be one of mine.

I wasn’t worried it would get wet. I had an underwater housing that I used to house the camera so it wouldn’t get wet should it get dropped in the river or if it should rain, which it did, but it didn’t. Get wet, that is. So I took some pictures, but it was the first time I used a camera while kayaking and it is a challenge to photograph something  while you are drifting with a current especially if the current is swift. It was also the first time I used the underwater housing so some of the photographs are more interesting than others. All in all, I had fun kayaking.

I was supposed to go to a movie on a Tuesday, but plans were changed at the last minute with last minute being that morning. There was a couple of hours notice but saying the last minute makes it seem more dramatic. So instead of a movie, I decided to do some yard work. When my neighbor saw me heading to the backyard, he came over and told me he had killed a couple of water moccasins within the last few days. He said he just wanted me to be careful when I was clearing some overgrown areas. Snakes don’t normally bother me, but water moccasins are venomous and aggressive. I filled two garbage cans with limbs of trees, fronds of palms and a variety of vines. It was the most I could put out for the garbage removers to remove. They have a maximum of three cans of yard waste, but I only have two cans and they will only remove it if it’s in a can. Garbage removers have become quite persnickety about the garbage they will remove. I didn’t see any water moccasins, so that was good.

I spent a Sunday sitting on the dock of the bay except it was a deck and it was overlooking a river. I was with my best bud. I whipped his ass in Scrabble. We didn’t play Scrabble on the deck, but that wouldn’t have changed the outcome. It rained for part of the time we were on the deck. We ate orange pineapple coconut pecan muffins. I had fun.

I made orange pineapple coconut pecan muffins. I wanted them to be cake-like cookies, but the first batch of cookies ended up the size of saucers but not the flying kind so I used the rest of the batter to make muffins. It was all a bit of an experiment. I took an orange cake mix and substituted a small can of crushed pineapple for the water and oil the mix called for and added eggs, a half a cup of shredded coconut and some chopped pecans. Mix it all together and pour it in the pans and voila – orange pineapple coconut pecan muffins. The voila part happens after you apply heat. The muffins and the saucer cookies were yummy.

I went to the dentist this morning for my annual teeth cleaning and oral exam but it’s not the kind of oral exam where I had to stand in front of a group of people and answer questions. The dentist just looked in my mouth. No cavities, so that was good.

Lindy, the dental hygienist, called out “Ahoy, Sandy!” to get my attention in the waiting room. She reminded me that today is International Talk Like A Pirate Day. I had almost forgotten. I hope you didn’t forget and have been talking the pirate talk all day. I would have used more pirate talk in this piece except that I’ve been saving my pirate talk for a certain pirate that always shivers me timbers with his, well, let’s just say we have fun together.

So thus ends the telling of what has been, and until we meet again, I’ll leave you with a parting word – 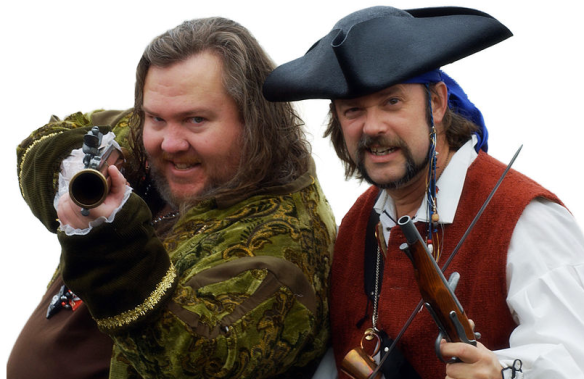 These guys (Mark & John) started the Talk Like A Pirate Day. I don’t know them. I found the picture on Wikimedia Commons.