I should probably pay more attention to the weather forecasts, but since weather can be a bit unpredictable, the attention I pay to it is also unpredictable. Take today for example. I remember hearing vague reports of rain for today with some forecasts calling for a 70% chance of rain. That report was a couple of days ago but I was occupied with other thoughts and activities most of Friday and Saturday and failed to watch any weather news or news of any kind.

So knowing it might be a rainy day, I was not surprised when I woke this morning to the sound of rain. The sound of rain which was accompanied by actual rain, continued as I enjoyed a breakfast of eggs on toast with melon. It continued as I threw a few clothes in a bag and some food in a cooler and placed those items in my car. It continued to rain as I left my home near the water to travel to a house that is even closer to the water to begin a petsitting job.

It has not stopped raining. I’ve had to let water out of the concrete swimming hole as Jethro used to refer to it two times in the six hours I’ve been here and it’s looking like I’ll have to do it again in another hour or so. So in an attempt to ascertain when the rains may subside I turned on the TV to the weather channel. I was having trouble locating my area on the map and then realized my area was where the big red blotch was, with more big red blotches and some yellow blotches heading my way.

Yes, I am enjoying the tropical effects of Debby. I just looked up the forecast on NOAA’s website. Not surprisingly, the rain chance for today is 100%  and my little part of the world is under the following warnings:

I think the last one is redundant. From what I understand, the sun may reappear sometime on Tuesday. Until then I’ll leave you with the view of the weather here as NOAA sees it. 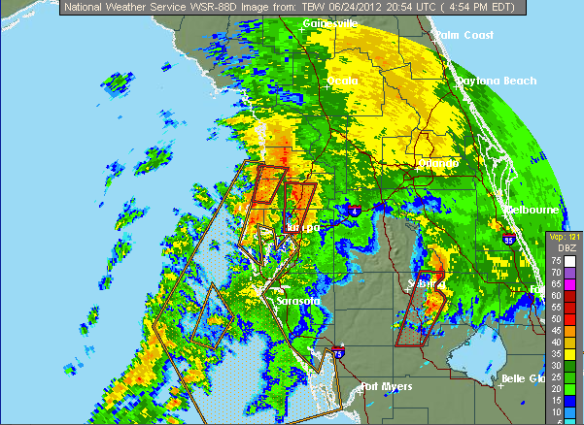 I’m somewhere in all that orangey mess.